In 1946 two local cricket clubs, Hadleigh CC and Thundersley CC, amalgamated at the end of the 2nd World War to form the club we know today.

The annual subscription for players in the new club were fixed at one shilling (5p) with match fees of 2/- (10p) for home games and 1/- for away matches!!
How times have changed! The club started with one of the key problems that we experience today – a lack of playing members. Initially the club ran one Saturday team, one Sunday team and a Wednesday team – for the shopkeepers who had that day off each week. How times have changed again!!!

Believe it or not, we still have active members (very few) who were there from virtually the start of the new H&TCC. Unfortunately we lost two of our long-standing members in 2015 who passed in their nineties but who had active associations with the club since its formation in 1946. Jimmy Watson was the first Wednesday Captain and Albert Collins played from the mid-1940s until well into his 70s and captained the 3rd XI in the 1960s era.

This information was provided by John Jarvis who played for H&TCC as a school boy in the 1940s. He was probably but not certainly, at school when this team photo was taken. The photo was taken before 1953 when the pavilion was opened. John later went on to be the Club Captain for a number of seasons in the 1960s and 70s era; John has also been Chairman and President of H&TCC in his later years, as well as served for many years on ECB (England and Wales Cricket Board) Committees and the Essex County Cricket Club Committee. Now well into his eighties, he currently organises a monthly lunch for current and past players/members during the winter months, raising funds to improve the facilities at the club for all to enjoy in the process.

The original H&TCC Pavilion was opened in 1953 in John Burrows Recreation Ground with the raising of the flag by Essex CCC and England Test Player, Trevor Bailey.

This photo was taken on the day and shows all the players who took part in the celebration match. I believe that Trevor Bailey was on Test duty at the time and he probably shouldn’t have even got changed for the match, let alone play! I am reliably informed that he did bat, but didn’t take the field!

As far as we can tell, the 22 players and officials on the day that can be named from left to right are:-

A large crowd assembled in August 1953 in John Burrows Recreation Ground for the official opening of the new pavilion which subsequently burned down on Christmas Eve 1970. The replacement pavilion was opened in August 1971 and a major extension was added in 2016-17.

T.E. Bailey (Essex & England) was the guest of honour and pulled up the club flag to officially open the new building. He then took part in an exhibition match between the club and a Southend District Cricket Association select XI.

To the left of the picture is Rectory Road looking towards the corner with New Road. No ‘health and safety’ barriers between the club and the roads then – just a hedge, a ditch and a few young trees!

All information provided by John Jarvis. John was born and brought up in Hadleigh and attended Westcliff High School. He played as a schoolboy for Hadleigh & Thundersley from 1946 until retiring from playing senior cricket in the late 1970s. John was a regular 1st XI player throughout the 50s and 60s as an aggressive batsman and off-spin bowler. He held the offices of Club and 1st XI Captain, Chairman and President and is now an Honorary Life Member of the Club in recognition of his services to the club. He also served for many years on Essex County Cricket Club Committees and a number of MCC Committees which demonstrates his life-long dedication to our local cricket Club as well as in helping to develop the game of cricket at County and National levels.

Now in his 80s, John currently organises a monthly Lunch Club which meets every 1st Thursday of the month between September and March. The Lunch Club helps to keep ex-players and friends of H&TCC in touch and raises much needed funds for club improvements for the benefit of all. The Lunch Club has funded a newly refurbished kitchen and the purchase of much need Bar furniture in recent times. A typical match day in the late 1950s

Throughout the 1950s and 60s it was not unusual to find a good crowd of spectators around the boundary on match days in JHB when the 1st XI was playing. A shed near the pavilion housed the deck chairs and folding chairs which were used by spectators.

When Hadleigh was batting the youngest member of the team, especially if he was batting low down in the order, was sent round the boundary to collect donations to aid club funds. Happy Days!!

This looks like a benefit match between H&TCC and Essex as it includes Brian Taylor (Wkt) (far right) and just to the left sitting down looks like Trevor Bailey. Is that Michael Bear (Essex) standing at the back? H&TCC players that can be identified include Jimmy Watson (one the left about to bat), Geoff Byford (standing behind Jimmy) and John Jarvis (far right sitting down). The original pavilion, which was modelled on the traditional pavilion seen in many villages was opened by Trevor Bailey in 1953. It stood on the site of the current pavilion until it was destroyed by fire on Christmas Eve in 1970. The current building was built in the summer of 1971. This building was extended during 2016-17 with grant funding from the Veolia North Thames Trust, CPBC, the Essex Community Initiative Fund, Essex Community Foundation, Essex & Southend Sports Trust and donations from members and friends. The pavilion now boasts six changing rooms and a large social area. 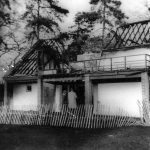 Much was lost in that fire but with renewed determination, a new pavilion was built and was operational by the middle of the following cricket season thanks to the hard work of club volunteers who helped with digging foundations and building walls – alongside help from the professionals!

The new pavilion has seen constant amendments and improvements over the years and we are currently concluding a very ambitious extension project which will see the addition of four new changing rooms, a much bigger social area on the first floor with disabled access and facilities. The aim is to create a sports/community hub in John Burrows which will serve not only the members of the club, but community groups as well. The plan includes the construction of an external public toilet facility on the ground floor accessible to all park users, as there isn’t an available toilet for them to use at the moment. This picture shows the pavilion prior to its extensions in 2017 on a brilliant summer day with not a cloud in the sky! There seems to be a good crowd watching the match and even some spectators watching from the boundary.

The building that replaced the fire-gutted original pavilion in 1971 was added to and altered over the years; the most notable alteration being the filling in at the front of what was an overhang to accommodate a new beer cellar to the right and a storage facility to the left (the shutter for the storage area is up in this picture).

Chairs, benches and tables were stored in the shuttered store room and on International Days in July, the room was turned into a temporary bar area for the benefit of the many spectators from the local community coming to see the ex-Test players in action against a select XI made up mainly of our club players with a few ‘guests’.

In its heyday, between the late 1940s and mid 1960s, matches in JHB were well attended by spectators who came from as far away as Shoeburyness. As a young cricketer in the mid-60s, our current Secretary was often sent around the boundary when H&TCC side was batting to ask for cash donations for the Club from the spectators – taking round a special collection box. Deck chairs were available for spectators for a nominal cost of 6d – 2.5p in new money. Ice Creams and sweets were also sold to children and park users from the back of the pavilion facing the service road.

In the 1970s and 1980s the main square was in excellent condition and the outfield was very smooth and fast, especially after a prolonged dry spell – as is evident in the picture above.

In the 1960s there was no protective fencing around the ground on New Road and Rectory Road as there is today, but with the bats that were available at the time, not many big sixes were hit out of the ground and into the roads and nearby houses at any time – even during Cricket Week.

For many years (25+) H&TCC held an annual charity Boxing Day match against Roger Buxton’s XI. When Roger’s team was no longer able to be there, the final few years of this unique local event were against a ‘select’ team from Leigh-on-Sea CC. Matches were played on a coconut matting wicket laid out on the football pitch adjoining the main square.

In one of the early matches, Roger Buxton (off-spin bowler) came on to bowl against John Jarvis. After only a couple of balls, JJ was caught in the deep, much to Roger’s delight. His joy was short-lived as the umpire after a while called ‘No Ball!’ On asking why this decision was made, the umpire replied: “You have been bowling a lot of no balls but Mr Jarvis told me only to call one when it was important!” From my recollection there were only a small number of matches held in the snow and footwear included football boots and whitened wellies worn by Len Rodwell!

This match was played against a club side in Cricket Week which is always held during the first full week in August.